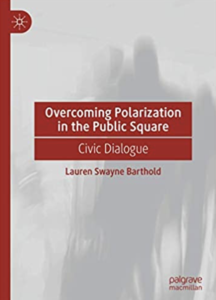 The book is comprised of six chapters and makes a case for how dialogue can help to break through particularly polarized sociopolitical spaces. According to Barthold, when the public square has become throughly polarized and people seem to ignore or have no interest in rational argumentation or appeals to empirical facts, the focus should turn first to  building trust so that openness and mutual understanding can occur. On Barthold’s view, civic dialogue must be structured in such a way that it creates a space for genuine listening and reflecting on one’s own position and the other’s. The hope is that while acknowledging the real differences that exist among individuals and groups, such structured dialogue will allow what we share in common as human beings to come into focus.

Barthold draws from a variety of dialogue partners and texts including Plato’s Socrates from the Republic, Martin Buber, John Dewey,  Hans-Georg Gadamer, Hannah Arendt, Miranda Fricker, and contemporary research on cognitive bias. While engaging philosophical sources and insights, Barthold also turns to the work of dialogic practitioners. E.g., in chapter 4, she discusses an approach to dialogue called, “Reflexive Structured Dialogue,” which “places first person experience and narrative” at the center of dialogic practice (Overcoming Polarization, p. 19). Against the conclusions of certain practitioners who claim that mutual understanding is a form of empathy, Barthold argues that “the goal of dialogic understanding should not be conceived as empathy–either emotional or cognitive.” Rather, in accord with insights from Buber and Gadamer, Barthold contends that “mutual understanding is best defined as acknowledging the other’s claim to existence as a Thou. To take up the truth claim of the other is to engage in a dialogic relationship that affirms the other’s status as a Thou.” (ibid., p. 21).

Given the current dialogical breakdown, polarization, dismissal of science, and lack of trust among differing groups in the United States, Barthold’s book is a welcome contribution to both the public sphere and the classroom.

If you want to learn more about Lauren’s book, you may listen to her discuss the book in an interview on the podcast “Ethics in Action.” 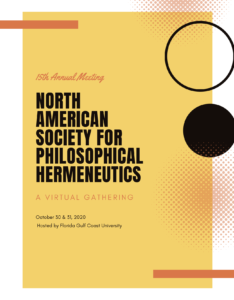 Due to the ongoing COVID-19 pandemic,  the NASPH 2020 annual meeting will take place via Zoom on the afternoon of Friday October 30 and from mid-morning to mid-afternoon on Saturday October 31.

Though the format will be unusual, we have an amazing lineup of speakers including Dr. Ted George, Dr. Lauren Barthold, and Dr. John Arthos and a panel on “Ricoeur and the Just University,” featuring Dr. Dan Boscaljon, Dr. Jeff Keuss, and Dr. Glenn Whitehouse. We look forward to lively discussions and hope that you will join us!

For more information about the program, speakers, and papers, see our listing in PhilEvents.

Lastly, more information will be posted soon on the NASPH website, including how to obtain the Zoom link to enter the conference, etc.

For those interested, the North American Society for Philosophical Hermeneutics is accepting papers for the 2020 NASPH annual conference at Florida Gulf Coast University, Oct. 29–31.  Here’s a PDF of the CFP:  2020 NASPH CFP

One of Hermeneutical Movements’ aims is to promote the philosophy of Hans-Georg Gadamer and those who think with and beyond Gadamer. Our Book Spotlights, Article Spotlights, Mini-Reviews, and Online Book Symposia work toward that end. Book Spotlights are brief 100-200 word descriptions of a book. Article Spotlights are brief 100-200 word abstracts with links to the authors’ articles. Mini-Reviews are 500-1500 word engagements with a theme or book chapter. For Book Symposia, we will invite two scholars to write 1500-2000 word essays on an author’s work and will also include the author’s response. All three essays will then be posted and readers are invited to participate by offering constructive and critical comments.

Our first Book Spotlight is Lauren Swayne Barthold’s book, A Hermeneutic Approach to Gender and Other Social Identities (Palgrave, 2016)

Book Description (From Back Cover)

This book draws on the hermeneutics of Hans-Georg Gadamer to inform a feminist perspective of social identities. Lauren Swayne Barthold moves beyond answers that either defend the objective nature of identities or dismiss their significance altogether. Building on the work of both hermeneutic and non-hermeneutic feminist theorists of identity, she asserts the relevance of concepts like horizon, coherence, dialogue, play, application, and festival for developing a theory of identity. This volume argues that as intersubjective interpretations, social identities are vital ways of fostering meaning and connection with others. Barthold also demonstrates how a hermeneutic approach to social identities can provide critiques of and resistance to identity-based oppression.

Lauren Swayne Barthold is Associate Professor of Philosophy at Gordon College, USA. She is also the Cofounder and Coadvisor of the Gender Studies Minor. She is the author of several works on Gadamer, including Gadamer’s Dialectical Hermeneutics.