Graham McCaffrey, PhD is an Associate Professor of Nursing at the University of Calgary. He has a book, Nursing and Humanities forthcoming from Routledge, that explores the relationship between nursing and the arts and humanities, including philosophical hermeneutics. 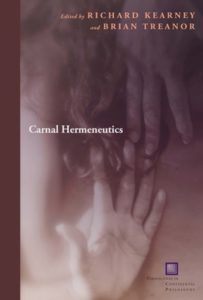 This Fall, I taught an undergraduate class in addictions and mental health nursing, covering topics that included the neurobiology of addictions, early childhood development, and attachment theory. Whatever the topic, there is always the task of connecting theory to nursing care, of how to bring knowledge into practice with patients. It is a basic hermeneutic question for nursing: who is this facing me as a patient, and what do they ask of me? Mental health nursing has always been an interpretive practice in certain ways, but new developments in related scientific fields call us to develop more layered understandings of our practice. Carnal hermeneutics, as set out by Richard Kearney, offers a creative language to do so.

Mental health nursing has a hybrid history, reflected in changing trends in its naming. Previously, it was more commonly called psychiatric nursing, implicitly under the ideological and practical direction of a medical specialty. Thus it has followed trends in psychiatry over the decades, from a psychodynamic orientation (emphasis on inner life, language, interpretation of symbols and actions), to behaviourism (emphasis on outward actions as objective signifiers of mental disorder), to brain chemistry (emphasis on inner physical life, mind and body reduced to epiphenomena). Shifts in nomenclature may both reveal and conceal actual shifts in ideological commitment. The more recent preference for “mental health nursing” weakens the association with psychiatry and yet the profession itself continues to carry traces of all the trends listed above. Mental health nursing in addition carries the historical legacy of the asylum orderly role of containment and control (mental health nursing to this day tends to have a higher proportion of men than other nursing fields), and of professional nursing with its legacies of caring beliefs. Our latest iteration is “addictions and mental health nursing” – an unwieldy title that now reflects the actuality of overlap between addictions and mental health disorders, both at the level of causation and presentation.

With its hybrid ancestry, mental health nursing cannot escape being an interpretive practice, even where one or other tradition predominates. The nurse-interpreter, prejudiced in Gadamer’s sense, is always already being interpreted by a blend of professional traditions, cultural conditions (micro and macro), and personal dispositions. Even at its least interested in the patient’s inner world or past life, mental health nursing relies upon reading of actions and gestures, and on working through language, in relationships between people in space and time, all of which entail interpretation.

Having spent some years working in a therapeutic community, using a model of psychosocial nursing closely based on psychodynamic principles, I have my own bias within my discipline towards the therapeutic possibilities of speech, dialogue, speaking and listening. However, there is a dialectical movement between control of behaviour and understanding of inner life that is enacted differently by individual nurses and according to the local dictates of clinical settings. It is possible to idealize the speaking/listening agent at the expense of the significance of bodies in space, in relation to furniture, doors, windows and other bodies.

There is a dialectic between inner life (both biological and mental) and outer behaviour (including expressed language). As I have sketched out above, mental health nursing has always moved inside this dialectical structure, but its terms have never been static and recently have moved in significant ways. In the 30 years I have worked in mental health, I have seen a shift away from psychotherapeutic modalities such as groups, towards reliance on psychotropic medications and the assumption that mental illness is all a matter of brain chemistry. Now there is a further, and more hopeful shift again, embracing neurological science but going beyond the oversimplification of brain chemistry.

Addictions and mental health latterly have been tentatively welcomed into the fold of proper medicine, now that we can think about them in terms of neural pathways and brain chemistry. “We are our brains” is a popular mantra when examining the role of brain development in patterns of behaviour. It’s a Cartesian halfway house, “I think with my brain, therefore I am” though the body, apparently, remains an appendage, now a kind of puppet controlled by the all-important brain. While it may be true that nothing in human life happens without the involvement of the brain, to assert absolute self-identification is a kind of nihilism. The brain, pre-eminent in some ways, is at the same time the organ we are least aware of. Mental health nursing continues to be a matter of persons meeting persons in certain places within parameters of social value, relating for defined purposes through language and action. Knowledge of the brain changes nothing in this basic locus of action, but it does add interpretive layers, that carnal hermeneutics can work into an enriched account of mental health nursing as an interpretive practice.

Richard Kearney argues in Carnal Hermeneutics that Ricoeur extended Husserl’s phenomenology of the flesh into a carnal hermeneutics that recognizes the other as a body like oneself and as another that requires inferential reading or “a special grammar of carnal hermeneutics across distance, gaps and differences” (p. 54). Ricoeur, he notes, likened this interpretive relation to the reading of symptoms. Reading of symptoms through the body can become a reductive habit among mental health nurses. One piece of professional shorthand is to dismiss a patient’s actions as “behaviour” which on the face of it is meaningless, since to be alive is to exhibit behaviour of one kind or another. Condensed within the word, however, is a framework of judgement, that a specific behaviour is considered as manipulative, attention- seeking [1] and by implication under the person’s conscious control. “Behaviour” in this localized sense is never applied to oneself (possibly to a colleague, and if so to call their actions into question) and has a collusive function since to understand the intent of the term is already to participate in assumptions about where the border lies between the sick and the well, the sane and the mad.

Addiction is associated with chemical pathways in the brain, linking to desire, reward, the need for comfort, and connected to memories and meanings mapped on to the world. Desire is for something, comfort derived from something…chemical pathways lead out from the brain, through the flesh, into the world where desire, reward, and comfort take on meanings, actual and enculturated. Kearney says, “Every carnal act and organ inscribes its own imaginaire…Nature is already culture as soon as we sense it as this or that…Sensation is expression and expression is sensation. Flesh is word and word flesh” (p. 45-6).

The rush for overly simple genetic explanations of personality traits and likelihood of developing mental health disorders has given way to the more cautious, complex and less certain science of epigenetics, the endlessly variable interchange between genetic loading and how genes become expressed in interaction with environmental stimuli. Hence the significance attributed by neurodevelopmental scientists to what they term “serve and return” interactions between infant and parent or principle carer. Very early on, the infant learns what to expect from the world, and how her or his expressions, facial, vocal, or gestural are likely to be received.

Prejudices are bred in the bone, or at least held in neural pathways that are shaped through interaction with the environment and fed by genetic availability. Freud has received a largely unacknowledged, if partial vindication in a new interest in “trauma-informed care.” Although the apparatus of Freud’s schema of the unconscious is gone, the basic insight that early experiences inform later patterns of emotional response and behaviors has been re-instantiated through empirical investigation of correlations between childhood trauma and later life health outcomes, and of the biological effects of trauma in the brain. A large longitudinal study known as the Adverse Childhood Experience study has found strong correlations between the numbers of “adverse experiences” a person had growing up (for example abuse, neglect, or a parent with addictions) and health outcomes later in life; not only mental health problems such as depression or anxiety, or addictions, but also physical conditions like heart disease (Center for Disease Control, 2019).

Merleau-Ponty’s term chiasm describes a two-way crossing between self and world. Fleshly signification as well as language passes back and forth and behind the signification, in the flesh itself lie layers of dispositional matter, in nerve pathways, brain tissue, cellular functioning, bodily affordances. Addictions and mental health nursing is not random, it has threads it must follow through a mesh of meaning, carnal and enculturated, in constant interaction with the world. The charged flesh encounters the other, not in a vacuum, but in an environment that is itself charged with histories, laws, ethical codes, and local customs.

[1] Another example of hermeneutic paucity – how many kinds of behaviour are about seeking attention in some way, and yet it is pronounced as an end to curiosity about a patient’s feelings, motives, desires – not as a start.