This wonderful volume edited by Stefano Marino and Pietro Terzi offers the reader a comprehensive account of the influence and reception of Kant’s Critique of the Power of Judgment in the 20th century. The book consists in eighteen chapters and has an international list of contributors. 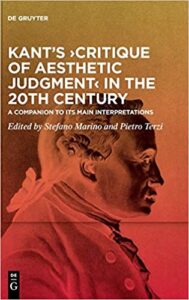 Chapters are devoted to Kant’s influence on the phenomenological and hermeneutical traditions. For example, Günter Figal’s chapter, “Blank Spaces and Blank Spots,” investigates Heidegger’s apparent ignoring of Kant’s third critique. That is, in both the “Origin of the Work of Art” and his 1936–37 lecture course on the same topic, where he critiques Erlebnis-Ästhetik “Heidegger presents the philosophical project of aesthetics without mentioning the book that in general is most closely associated with it: Kant’s Critique of the Power of Judgment” (61). Dennis J. Schmidt’s chapter, “The Place of Kant’s Critique of the Power of Judgment in Gadamer’s Hermeneutics,” charts Gadamer’s complex engagement with Kant in part 1 of Truth and Method. Although Gadamer’s hermeneutic-aesthetic project draws from Aristotle and Heidegger, Schmidt argues that the “Critique of the Power of Judgment is the key text in the formulation of hermeneutic theory for Gadamer” (76).

The volume also includes various readings of Kant by key thinkers in the French tradition. For example, Anne Sauvagnargues’s chapter, “The Discordant Accord of the Faculties: Deleuzian Readings of Kant,” argues that although Deleuze often criticizes Kant, he regularly returns to Kant’s third critique and utilizes Kantian insights (often creatively reinterpreted) to develop his own thought. Sauvagnargues charts Kant’s influence on several of Deleuze’s texts including Difference and Repetition (1968) and especially in his late philosophy where “the importance of Kant and his analysis of the sublime stand out as major references in his philosophy of cinema, the image and time (The Movement-Image [1983] and The Time-Image [1985]) (195).

Also noteworthy is the detailed Introduction by Stefano Marino and Pietro Terzi, which does an amazing job—within a limited textual space—of tracing the history and geography of Kant’s reception. The volume comes highly recommended and will be of interest to Kant scholars as well as those interested in aesthetics, the philosophy of art, and the influence of Kant on contemporary German and French philosophical traditions.