For those planning to attend SPEP 2021, we invite you to attend the North American Society of Philosophical Hermeneutics’ Satellite Session which will take place on Sunday, Sept. 26, 11 am – 2 pm EST. (You have to register with SPEP to gain an access key. Please visit SPEP.com to register. ) Below is the program for the NASPH session. We hope to see you there!

The Gadamerian Mind, edited by Theodore George and Gert-Jan van der Heiden has now been published!  A brief description of the volume from Routledge’s website is listed below.  Our readers can receive a 20% discount by entering this code: FLY21. 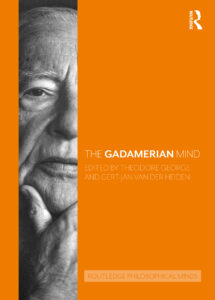 Hans-Georg Gadamer (1900-2002) is one of the most important philosophers of the post-1945 era. His name has become all but synonymous with the philosophical study of hermeneutics, the field concerned with theories of understanding and interpretation and laid out in his landmark book, Truth and Method. Influential not only within continental philosophy, Gadamer’s thought has also made significant contributors to related fields such as religion, literary theory and education.

The Gadamerian Mind is a major survey of the fundamental aspects of Gadamer’s thought, with contributions from leading scholars of Gadamer and hermeneutics from around the world. Thirty-eight chapters are divided into six clear parts:

Although Gadamer’s work addresses a remarkable range of topics, careful consideration is given throughout the volume to consistent concerns that orient his thought. Important in this respect is his relation to philosophers in the Western tradition, from Plato to Heidegger.

An indispensable resource for anyone studying and researching Gadamer, hermeneutics and the history of twentieth-century philosophy, The Gadamerian Mind will also be of interest to those in related disciplines such as religion, literature, political theory and education.