David Utsler, PhD, is currently part-time faculty in philosophy for Texas Woman’s University and North Central Texas College. He is co-editor of Interpreting Nature: The Emerging Field of Environmental Hermeneutics (Fordham 2014) along with Forrest Clingerman, Brian Treanor and Martin Drenthen. He is also co-author with Cynthia R. Nielsen of “Fricker, Gadamer, and Honneth: Testimonial Injustice, Prejudice, and Social Esteem” in Recognition Theory and Epistemic Justice, eds. Paul Giladi and Nicola 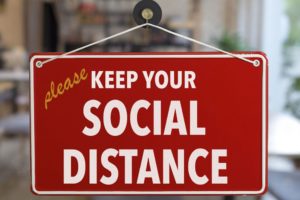 I .  Getting a sense of sense

In the first installment, I noted that carnal hermeneutics refers to the body as interpretation. While “touching” primarily on touch, I highlighted that Kearney and Treanor insist on an “equiprimordial redistribution of the senses” as a necessary aspect of carnal hermeneutics in order to understand how we, through the body, interact with other bodies and make sense of the world. Interpretation of our world begins and is carried through within our senses.

There is no doubt that a world of social distancing has “re-placed” our bodies. The way that we orient ourselves to those around us has changed. The way we work has changed as many who went to the office now work from home, while others have been “dis-placed” as working non-essential jobs now have no job. Social distancing, for the most part, has “dis-placed” us from one another except to those in our immediate household. On a positive note, as I take walks in my neighborhood I am witnessing far more people that what is typical out and about themselves. A change of place often means a change of pace: what we do with our bodies (how we live) is in direct relation to where our bodies are placed.

II .   The confinement of social distancing

In his contribution to Carnal Hermeneutics (“Skin Deep: Bodies Edging into Place”), Edward S. Casey writes: “Some places are hard to bear—to bear bodily” (Casey. 2015, 159). Casey writes of the specific example of solitary confinement and the devastating effects such can have on a human being. Now, while I would not think to equate being confined in the comfort of our own homes with prisoners in solitary confinement. But there are some comparisons alongside the differences, the differences being different to an extreme order and degree.

Consider the language that has entered our discourse. Shelter-in-place. In other words, stay where you are and do not come out. Whereas a prisoner is placed is solitary as a punishment, we are asked to “place” ourselves at home for our own safety and the safety of others. Yet, what many experience is still a kind of confinement. As Casey says of the prisoner, he has nowhere to go (Casey, 160). While the prisoner is limited by walls, many feel limited by the walls created by COVID-19. Our ordinary lifeworld has been re-oriented such that we have limitations on where we can go. Places we went at will at now no longer available to us. To varying degrees from mere frustration to fear of losing property (losing place), how we dwell has been destabilized and we are forced to re-orient ourselves in place by externalities outside of our control. To cite Casey in this context, “one’s coherent, customary world” (Casey, 159) has been, for an unknown length of time, upended. It no longer coheres the same and our customary way of being in the world is, for now, gone. In both “social distancing” and “shelter-in-place,” how we orient ourselves toward others and in place is altered requiring that we “make sense” of the world in new ways. This can have devastating effects on the human psyche and devastating effects socially. Yet, we can be hopeful for more positive outcomes.

I speak of “displacement” in two senses. People can be physically displaced by war, natural disaster, or other means where they are forced to leave one place and go to another. There is another form of displacement, what I call “displaced in place” where a familiar place has been altered to the extent that our orientation to that physical space is forever destroyed. For example, in the context of environmental justice, there are seemingly a limitless amount of cases that one could cite where due to the environmental effects of the actions of others, entire ways of life of a people have been lost.

Casey writes of implacement and displacement in his book Getting Place Into Place. He writes: “The power of a place such as a mere room possesses determines not only where I am in the limited sense of cartographic location but how I am together with others (i.e., how I commingle and communicate with them) and even who we shall become together” (Casey. 2009, 23). In this single profound sentence, Casey has shown that a place is not merely a physical space but, to put it in the terms of carnal hermeneutics, is an embodied interpretation determined by our orientation to the place itself and to others with whom it is shared, effecting our very identities, both individual and communal. Certainly, social distancing and shelter-in-place orders have determined how we “commingle and communicate” with others and, I would add, the places wherein we have a sense of self. The loss of place (displacement) can occur even within the same material space. As hermeneutics in both Gadamer and Ricoeur have repeatedly communicated, interpretation always implies an interpretation of self. Identity is always bound up with understanding.

The current “landscape” in which we now dwell has been altered by COVID-19. How we are within the places where we are and who we are with one another has, even if only temporarily, changed. The question now becomes, “how shall we respond?” The discordance and disruption created by COVID-19 also creates the imperative that we must reorient ourselves bodily (refigure) the world to which we had become accustomed (prefigured and configured). In the final installment, I will reflect on this imperative in light of the narrative hermeneutics of Paul Ricoeur, particularly on his explication of threefold mimesis.

Casey, Edward. S. (1993, 2009) Getting Back into Place: Toward a Renewed Understanding of the Place-World. 2nd Edition. Bloomington: Indiana University Press.